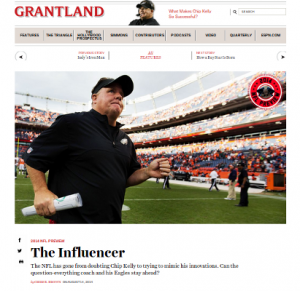 Even if the Philadelphia Eagles don’t do anything this season the team’s coach, Chip Kelly, has owned the preseason. A steady stream of profiles documented his sports science approach to American football over the past few weeks (Grantland, Philadelphia Inquirer, ESPN The Magazine, CoachingSearch blog, The MMQB).

There was also a useful essay by Kenneth Corsten in Scorecard blog on sports business models, specifically the business model used by the German national soccer team that produced the recent World Cup title. Wherever there is business there are business models, and sports is no exception. So when you look at the Eagles you see that aside from player personnel decisions, the business model and coach Chip Kelly are one in the same. You can also see that sports science has little downside against considerable upside for the teams that decide to invest in it.

A longer essay on sports science business models is in the works but the basic takeaway is that these business models are difficult, mostly because they have mostly not yet been invented. So the task often becomes doing something that hasn’t ever been done before.

Fortunately it is usually enough to know that an experimental business model is effective if it is making progress towards concrete goals. If the goals for an applied sports science program are to improve athlete performance, reduce injuries, identify/develop talent, save money and win games (in whatever order), then sports science done well should do all of those things, not just some of them. Chip Kelly, by all accounts, is doing sports science well in Philadelphia.

And the Most Annoying Thing I Read Last Week: